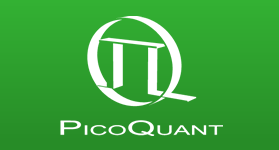 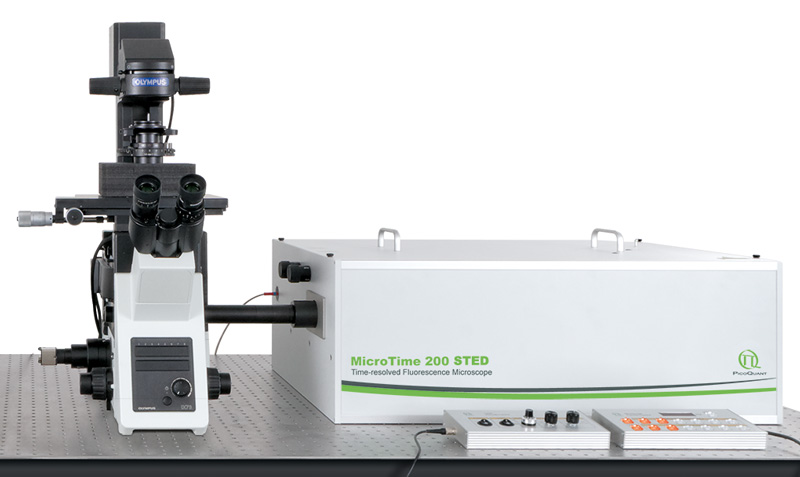 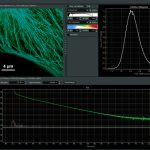 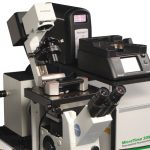 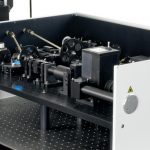 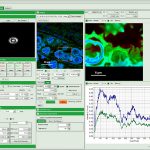 In the recent years, super-resolution microscopy has gained more and more attention. It has now evolved beyond the stage of development and permits to investigate biological systems that were formerly obscured by the diffraction limit of light. One of the most popular techniques for super-resolution imaging is Stimulated Emission Depletion (STED)microscopy. STED is usually performed with confocal microscopes and is therefore ideally suited to be added to the MicroTime 200. The integration of STED into the system has been driven towards highest robustness and ease-of-use. The system permits to perform STED microscopy without lengthy alignment preparations while still having the choice to modify the system and use the full capability of the open microscopy platform MicroTime 200.

The MicroTime 200 STD is a time-resolved confocal microscope with single molecule sensitivity and super-resolution capabilities. Hence, numrous applications are possble with this instrument, including:

Detecting the emission of single molecules is important in biochemistry, drug development, and fundamental research. Single molecule sensitive systems aim at minimizing the number of optical elements to maximize light throughput, which is why piezo scanning systems were commonly used. With the FLIMbee add-on, the MicroTime 200 retains its outstanding single molecule sensitivity, but now with a much higher scanning speed. The images shown in this example were obtained from single ATTO 655 molecules bound to a glass coverslip, imaged under STED and confocal conditions with polarization- and time-resolved data acquisition. By using Pulsed Interleaved Excitation (PIE), STED and confocal data can be acquired quasi simultaneously, making the analysis of blinking and bleaching of single molecules straightforward.

Super-resolution STED imaging is now a well established tool in molecular biology. Single molecules, cells, and tissue samples can be investigated using a wide variety of parameters, like emission color, polarisation, and fluorescence lifetime. With the MicroTime 200 STED, super-resolution FLIM images can be easily recorded while the high scan speed of the FLIMbee helps reducing phototoxicity and bleaching during STED imaging. The example shows an image of the microtubule network in an adherent cell. The higher resolution of STED allows studying the interaction within the network in much more detail.

In this example, both fluorescence and topological information of dye-labeled beads were recorded simultaneously from the same sample area. Fluorescence parameters like emission intensity and lifetime shown in the top figure were obtained with STED super-resolution (<50 nm) on a MicroTime 200 STED. A JPK NanoWizard 3 atomic force microscope (AFM) was interfaced to the time-resolved fluorescence microscope, which allowed recording a height map from the same sample are (as shown in the lower picture). The easy-to-use combination of fluorescence lifetime imaging (FLIM) with topological information from AFM offers exciting avenues for investigating the structure-fluorescence interactions in e.g., biomaterials.

Nanorulers labeled with two different dyes are available to evaluate the resolution of diffraction-limit-breaking microscopes. This example shows GATTAquant STED 140RYR nanorulers, labeled with two red (ends) and a yellow dye (middle part). The distance between a red and yellow marker is 70 nm, while two red dyes on the same nanoruler are separated by a distance of 140 nm.

Fluorescence Correlation Spectroscopy (FCS) is a well established method for studying the diffusion behavior of molecules in solution or membranes. Under confocal conditions, the minimal size of the FCS observation volume is restricted by the diffraction limit. However, this limit can be circumvented by employing Stimulated Emission Depletion (STED) and the observation volume can be shrunk in a gradual manner by increasing the STED laser intensity. At low STED laser powers, a small increase in intensity leads to a rapid shrinking of the lateral observation area diameter. Going from 0 to 50 mW reduces the spot diameter from 250 to less than 100 nm, depending on the fluorophore used. At high STED powers, however, increases in intensity will result in slower shrinking until a diameter below 50 nm can be reached. Shrinking the detection volume helps in overcoming averaging issues in long transit paths and also enables determining the type of hindered diffusion behavior of fluorophores in lipid membranes. Furthermore, using a fully Pulsed Interleaved Excitation (PIE) illumination scheme for excitation and STED lasers allows collecting FCS data under both confocal and STED conditions quasi-simultaneously. PIE-STED-FCS allows for a straightforward check whether the STED laser has an influence on the investigated diffusion dynamics.

Two fluorescent species can be distinguished by pulsed interleaved excititation (PIE) with two different diode lasers at 640 and 660 nm. Fluorescence is detected in two spectral bands. Fluorescence pattern matching was used to identify the contributions of each fluorophore. The example shows part of a U2OS cell labeled for tubulin with Abberior STAR 635p (green) and giantin with Atto647N (red) utilizing a single STED laser wavelength.

Molecular organization, localization and orientation of antifungal antibiotic amphotericin B in a single lipid bilayer

Reference to: MicroTime 200 Related to: FLIM

Exploring the HYDRAtion method for loading siRNA on liposomes: the interplay between stability and biological activity in human undiluted ascites fluid

Reference to: MicroTime 200 Related to: FCS